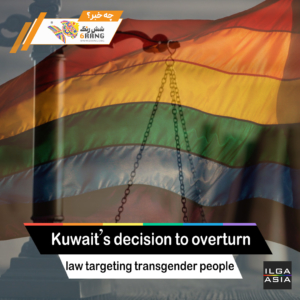 ‘A heavy rock has been lifted off our backs’: ILGA Asia welcomes Kuwait’s decision to overturn Article 198 that criminalised ‘imitation of the opposite sex’

Responding to the decision, Henry Koh, ILGA Asia’s Executive Director said, “This landmark ruling is a great leap forward for transgender persons and persons of diverse gender expressions in Kuwait. The decision to repeal Article 198 of the Penal Code is a step forward in the right direction and upholds values of non-discrimination.”

“The Kuwait authorities must ensure that those who were previously charged and arrested under this discriminatory law are released and all charges against them are quashed. We hope that the ruling will have a far-reaching impact on the rights of LGBTIQ individuals in Kuwait and in the region.”

Article 198 of the Kuwait Penal Code reads, “Whoever makes a lewd signal or act in a public place or such that one may see it or hear it from public place, or appears like the opposite sex in any way, shall be punished for a period not exceeding one year and a fine not exceeding 1000 Dinar or one either of these punishments.” The law does not criminalise any specific act, but the physical appearance of the individual, which can be arbitrarily determined to be in violation by the police. This has led to gross human rights violations against transgender and gender diverse individuals in Kuwait, including arbitrary arrest, detention and custodial violence.

On 3 October 2021, Maha al-Mutairi, a transgender woman was charged with “imitating the opposite sex” under Article 198 of the Penal Code and sentenced to two years of imprisonment. She continues to be held in Kuwait’s Central Prison for men. Reports suggest that she experienced physical and sexual violence, including rape, while in custody. In September 2017, a 19-year-old Polish Instagram celebrity was arrested in a Kuwaiti mall for looking ‘too feminine’ on social media. He was subjected to custodial violence at the detention centre where he was held for two weeks. Later he was deported and is now banned from entering Kuwait.

Police have relied on the vagueness and ambiguity of this law to harass, arrest and detain individuals for their real or perceived sexual orientation or gender identity. Shadi Amin, ILGA Asia’s Executive Board co-chair said, “As the LGBTI community in Iran and the region, we celebrate the Constitutional Court’s decision alongside our Kuwaiti friends. This victory is the first step in eliminating all discrimination against transgender persons. The Kuwaiti authorities must fully implement the ruling by removing all social restrictions, and we will continue monitoring the situation to ensure it will be as such.”

However, activists are also cautious that Article 198 has been overturned as it was found to be not specific enough to ‘legally determine a sinful act’ and that might motivate the parliament to enact a more specific and stringent law. M, an activist from Kuwait spoke to Dr Charbel Maydaa, ILGA Asia’s alternate co-chair and said, “We are concerned the Kuwaiti parliament might amend the inordinately vague law by adding a clear and much more restrictive article which heavily restricts the freedom of trans women in Kuwait.” But for now, M and other human rights activists celebrate the legal victory. “We are ecstatic, a heavy rock has been lifted off our backs.”