A 29-year-old transwoman in Semnan, Iran, was subjected to knife crime in December 2021 resulting in grievous bodily harm and hospitalisation. She has proclaimed that the attacker was in no way provoked by her or her companion, and that it was a hate crime due to her gender identity. 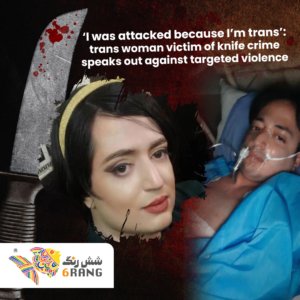 While sitting in a park, Yalda and her friend were approached by a man asking for a cigarette who then proceeded to threaten her with a knife. While defending herself, she received multiple stab wounds, namely in her chest, abdomen and neck. She has undergone two surgeries.

She has been vocalising the dire situation of trans people on her social media, saying that this attack was the result of transphobia and that the Iranian society does not grant any protection to trans people.

Although transitioning through gender confirming surgery is legal in Iran, there are no formal protections in place for trans people, particularly transwomen. In fact, in 6Rang’s recent research report, ‘Hidden Wounds’, it was found that 19% of LGBTI people in Iran have been subjected to violence by the judicial system.

Though Iran has been commended for its acceptance of trans identities (it must be noted that a full transition is required to acquire recognition by law), the treatment of these individuals by society, families and the government is unsavoury. Trans people in Iran are often subjected to physical and verbal violence, as well as being deprived of basic rights in education, healthcare and the workplace.