We are living in a situation where the Taliban has completed their dramatic sweep of Afghanistan. During their advance through Afghanistan, girls feared returning to ‘the dark days’ as the Taliban entered Kabul. This has shattered many people’s hope for change. 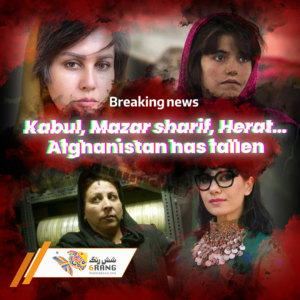 The international community, while passively observing this bizarre situation, left Afghanistan alone with the Taliban. We at 6Rang, alongside colleagues and friends of our Afghan counterparts, are watching these rapid shifts of power and are concerned about Afghanistan facing such global neglect. We hold the international community accountable for the plight of Afghan citizens now being held captive by the Taliban.

Meanwhile, the Islamic Republic is looking at these developments as more of an opportunity and has so far repeatedly and covertly, or even sometimes openly, supported Taliban forces.

Without a doubt, women and the progressive civil society, along with the LGBT community, leading activists, and Afghanistan’s civil society in general will be severely harmed by this rapid and unjust cataclysm in the most brutal way possible. We are also concerned for innocent people who are now forced to live in the shadows facing the fear of Taliban’s threats. The International community is absolutely responsible for this situation.

Afghanistan is one of the few countries in the world where same-sex relationships and homosexuality receive capital punishment. Considering the Taliban’s catastrophic approach to human rights and the consequences of its blatant violation, we are deeply concerned about the women and young girls of Afghanistan who are victims of systemic sexual abuse, the Afghan LGBT community and more importantly about Afghan refugees who have filed for asylum.

“Our task is to use the tribunes given to convey the voice of this voiceless community,” he added.

6Rang (Iranian Lesbian and Transgender Network), while declaring solidarity with the people of Afghanistan and the people of Iran, who are dealing with Covid-19 due to the recklessness and irresponsibility of the Islamic Republic, have decided to postpone our second virtual Iranian LGBT Pride, which was scheduled to take place on August 22nd. Here, we thank all who have contributed.

We hope to discern changes and improvements in the situation for the benefit of both nations.