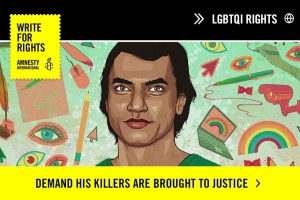 Amnesty International – Xulhaz Mannan was in his apartment with a colleague when men wielding machetes burst in and brutally murdered them.

Both men were killed in front of Xulhaz’s 75-year-old mother.

Xulhaz was a founder of Bangladesh’s only LGBTQI magazine. A daring venture in a country where same-sex relations are illegal. His attackers are believed to belong to Ansar al-Islam, the same extremist group responsible for a spate of similar assaults on bloggers promoting atheism, feminism, science and other secular issues.

Over a year since the April 2016 attack, no one has been charged for the murders despite ample evidence including eyewitness testimony and CCTV footage.

To compound the matter further, the government has shifted blame onto the victims. A government minister stated that movements promoting “unnatural sex” are not allowed in Bangladeshi society.

This unwillingness to find and charge Xulhaz’s killers sends a devastating message to courageous LGBTQI activists. Will you stand with the brave?

The Situation of LGBT Children in Iran
0 replies