TO: Member states of the United Nations Human Rights Council

We, the undersigned Iranian and international human rights organisations, call on your government to support the renewal of the mandate of the United Nations Special Rapporteur on the situation of human rights in Iran at the 46th session of the Human Rights Council. We also urge your government to use this opportunity to voice concern at the grave and systematic violations of human rights reported by the Special Rapporteur, and to call on Iranian authorities to put an end to the endemic impunity that surrounds these violations. 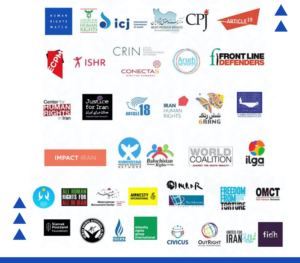 The renewal of this mandate is essential in light of the persistence of widespread and systematic violations of human rights committed by Iranian authorities with total impunity.

Iran remains second only to China in the number of executions carried out each year. In 2020, the authorities executed more than 240 people, including for drug offences and other acts that do not amount to the ‘most serious crimes’ under international law. Several people were executed in secret without prior notice to their families and lawyers. Among those executed was dissident and journalist Ruhollah Zam who was sentenced to death in connection with his anti-establishment social media news channel. Several protesters were sentenced to death and dozens of others faced capital crimes in relation to the nationwide November 2019 protests. The Iranian authorities executed at least three juvenile offenders in 2020, in violation of international law and despite repeated calls from UN bodies and member states for Iran to cease this unlawful practice and high-level bilateral engagement with the Office of the High Commissioner for Human Rights on this issue.

Fair trial rights continue to be systematically violated, making the hundreds of death sentences, corporal punishment sentences and long prison terms issued all the more egregious. The UN Working Group on Arbitrary Detention has raised alarm at ‘a familiar pattern of arrest and detention that does not comply with international norms’, including ‘lengthy detention pending trial with no access to judicial review; denial of access to legal counsel; incommunicado detention and solitary confinement; prosecution under vaguely worded criminal offences for the peaceful exercise of human rights; a closed trial and appeal by courts lacking in independence; disproportionately harsh sentencing; torture and ill-treatment; and denial of medical care’.[1] In addition to these concerns, courts consistency rely

on forced ‘confessions’ extracted under torture and other ill-treatment to issue convictions, as in the recent case of Navid Afkari, executed on 12 September 2020.[1]

The Iranian authorities continue to routinely arbitrarily arrest, detain and sentence individuals to prison terms and flogging for the exercise of their rights to freedom of expression, association and peaceful assembly. Among those who are targeted are protesters, media workers, journalists, political dissidents, artists, writers, and human rights defenders, including lawyers, women’s rights defenders, labour rights activists, minority rights activists, conservationists, anti-death penalty campaigners and those demanding truth, justice and reparation for the mass extrajudicial executions of the 1980s.

Authorities in Iran have further quashed civic space through state policies and the recent introduction of new provisions in the Islamic Penal Code, which further criminalise the exercise of the rights to freedom of expression, religion or belief. Violent crackdowns on protests have become intertwined with the imposition of internet shutdowns or disruptions in recent years. These measures stifle internet freedom and have been used by the authorities to prevent protesters from mobilising and to conceal the scale of grave human rights violations and international crimes carried out by the state and its security forces.

Conditions in many prisons and detention facilities are cruel and inhuman, with prisoners suffering from overcrowding, bad ventilation, lack of adequate food, poor hygiene and sanitation and inadequate access to toilet and washing facilities. Despite such conditions providing a breeding ground for infectious diseases, authorities have failed to adequately resource prisons to control the spread of COVID-19 and treat infected prisoners. They have excluded prisoners of conscience and others held for politically motivated reasons from temporary releases or pardons announced to mitigate the spread of COVID-19 and have deliberately denied them access to adequate health care.

As highlighted in the report of the Special Rapporteur before the Human Rights Council, discrimination in law and practice remains pervasive and a daily reality for women and girls, for persons belonging to ethnic, religious or linguistic minorities, as well as for lesbian, gay, bisexual and transgender (LGBT) individuals. Women and girls continue to face widespread and systematic discrimination in law and practice in all aspects of their lives, amid the authorities’ continued failure to protect them from gender-based violence.

Ethnic minorities, including Ahwazi Arabs, Azerbaijani Turks, Baluchis, Kurds and Turkmen continue to face entrenched discrimination, which curtails their economic, social, cultural and other rights. The High Commissioner has recently noted that ‘an apparently coordinated campaign has been targeting minority groups since December, including in Sistan and Balochistan; Khuzestan; and in the Kurdish provinces. Mass arrests and enforced disappearances have been reported, as well as increasing numbers of executions, following deeply flawed processes’[2]. Some ethnic minorities have also been disproportionately affected by the imposition of the death penalty in 2020.

Freedom of religion or belief continues to be systematically violated, including for Baha’is who face widespread and systematic persecution, hate speech and obstacles to access education and work. Christian converts, the Yarsan (Ahl-e Haq), Sunni Muslims and non-believers also face discrimination and persecution for expressing or practising their faith or beliefs.

These long-standing patters of human rights violations have been facilitated by systematic impunity and lack of transparency. An illustration of this crisis of impunity is the continued failure of the authorities to investigate and prosecute crimes and human rights violations committed in the context of the violent repression of the nationwide protests of November 2019. The state repression resulted in the unlawful killing of hundreds of men, women and children, the arrest of at least 7,000 others, and widespread patterns of enforced disappearances and torture and other ill-treatment of detainees to obtain ‘confessions’ that have been used to issue convictions in unfair trials. In his report before the Human Rights Council, the UN Special Rapporteur has expressed dismay that ‘more than one year on, the Government has failed to conduct an impartial, independent and transparent investigation into the use of excessive and lethal force during nationwide demonstrations in November 2019’.[3] On the contrary, the authorities have engaged in harassment and violence against victims and their families for seeking truth, justice and reparation, as documented in the recent reports of the Special Rapporteur.[4]

In this context, the mandate of the Special Rapporteur on the situation of human rights in Iran continues to be critical to monitor, document and report to this Council on steps taken by Iran to uphold its human rights obligations or of its failure to take such measures. It is essential to engage with Iranian authorities on issues of concern, and to make potentially life-saving urgent appeals and other communications. The mandate draws the attention of this Council to the voices of victims, and its expert findings and recommendations steer and inform the efforts of UN bodies and member states to encourage Iran’s authorities to undertake long overdue human rights reforms and hold them to account for human rights violations.

For these reasons, we urge your government to support the renewal of the mandate of the UN Special Rapporteur on the situation of human rights in Iran at this session and to press Iran to give unfettered access to the Special Rapporteur. We also call on your government to voice concern at the dire situation of human rights in Iran, and to send a strong message to the Iranian authorities that the cycle of impunity must be broken, and that members of the Council expect without delay the adoption of long-overdue human rights reforms and tangible improvements to the human rights situation in the country.

The Advocates for Human Rights

All Human Rights for All in Iran

Association for Human Rights in Kurdistan of Iran – Geneva (KMMK-G)

Center for Human Rights in Iran

Centre for Supporters of Human Rights

International Movement Against All Forms of Discrimination and Racism (IMADR)

World Coalition Against the Death Penalty