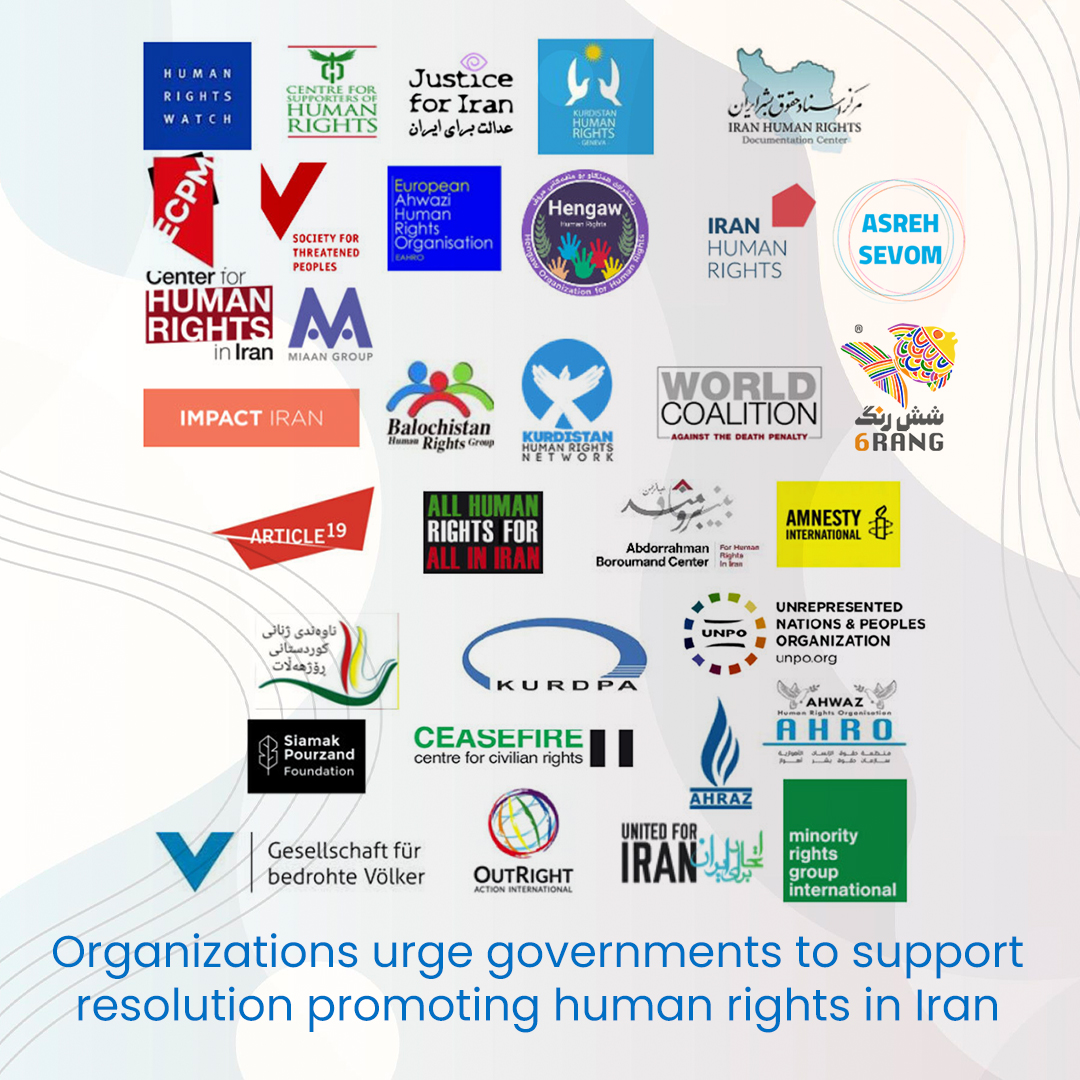 TO: All Permanent Missions to the United Nations in New York

The undersigned national, regional and international civil society organizations urge your government to support resolution A/C.3/75/L.31/Rev.1 on the promotion and protection of human rights in the Islamic Republic of Iran, adopted by the General Assembly’s Third Committee, when it comes for adoption by its plenary later this month.

This resolution provides an opportunity for the General Assembly to take stock of the human rights situation in Iran, including the violent repression of nationwide protests in November 2019. It is also an opportunity for the community of states to express concern about ongoing crimes under international law and other serious human rights violations perpetrated by the Iranian authorities and to help put an end to the systematic impunity that prevails in the country.

The resolution is presented to the General Assembly a year after the Iranian authorities perpetrated what the UN Special Rapporteur on the situation of human rights in Iran described as an “unprecedented violent crackdown against protesters”.[1] In response to nationwide protests in November 2019, the Iranian authorities waged a campaign of mass repression, including through the deliberate use of unwarranted lethal force to kill hundreds of men, women, and children. The vast majority of protesters and bystanders killed were shot by security forces in the head or torso, indicating intent to kill and exposing utter disregard for the right to life and international norms on the use of force and firearms[2]. Security forces also subjected thousands of men, women, and children to arbitrary arrest and detention, enforced disappearance, and torture and other ill-treatment. These human rights violations took place under the cover of the authorities’ near total shutdown of the internet, preventing people inside Iran from sharing images and videos of the crackdown with the rest of the world. Hundreds of people, including human rights defenders, have since been sentenced to prison terms and flogging, and several to the death penalty, in unfair trials stemming from the protests. Journalists have been put in jail in relation to their coverage of the protests.

To date, no public official has been investigated for ordering, committing, or acquiescing to these serious human rights violations. The Iranian authorities have ignored multiple calls for transparency and accountability from UN Special Rapporteurs, the UN High Commissioner for Human Rights, and the UN Secretary-General.

The draft resolution expresses concern about patterns of violations of civil, political, economic, social, and cultural rights detailed in the reports presented at this session by the UN Secretary-General and the UN Special Rapporteur on human rights in Iran. These include the widespread use of the death penalty, including against individuals who were children at the time of the crime, in violation of Iran’s obligations under international law. Iranian law retains the death penalty for offences that do not meet the threshold of the most serious crimes under international law, including some drug-related offences, as well as for acts protected under international human rights law, such as some consensual same-sex sexual conduct, and for vaguely worded offences such as “enmity against god” (moharebeh). In the past year, a disproportionate number of executions have been carried out against members of Iran’s Kurdish minority while several protesters and a journalist have been sentenced to death, giving rise to concerns that the death penalty is being increasingly used as a weapon of political repression against protesters, dissidents and members of minority groups.

Arbitrary restrictions on the rights to freedom of expression, association, and peaceful assembly are also highlighted in the draft resolution. Authorities have continued to arbitrarily detain hundreds of people for peacefully exercising their rights, including journalists and media workers, political dissidents, writers, and human rights defenders. Conditions in many prisons and detention facilities remain cruel and inhuman and have deteriorated amidst the authorities’ failure to contain the spread of COVID-19 in prisons and protect the health of those deprived of their liberty. Many of those detained for peacefully exercising their human rights have been excluded from temporary furloughs and pardons.

The draft resolution urges the Iranian authorities to eliminate, in law and in practice, all forms of discrimination. The undersigned organizations are also deeply concerned about ongoing discrimination and violence based on sex, political opinion, religious belief, ethnicity, language, gender identity, and sexual orientation entrenched in Iranian laws or in policies and state practices. Ethnic minorities, including Ahwazi Arabs, Azerbaijani Turks, Baluchis, Kurds, and Turkmen continue to face discrimination, impeding their access to education, employment, adequate housing, and political office. Freedom of religion or belief is systematically violated in law and practice and religious minorities including Baha’is, Christians, Gonabadi Dervishes, Jews, Yaresan (Ahl-e Haq), and converts from Shi’a Islam to Sunni Islam or Christianity continue to face systematic discrimination. Women continue to face entrenched discrimination, enshrined in law, including in relation to marriage, divorce, inheritance, and employment. The authorities’ failure to criminalize gender-based violence, including so-called ‘honor killings’ and early and forced marriages, has led to impunity for men who murder or otherwise harm their female relatives. Women and girls continue to suffer daily harassment and violent attacks stemming from discriminatory compulsory veiling laws and several women’s rights defenders who campaigned against such laws remain arbitrarily detained.

The undersigned organizations echo concerns in the draft resolution about enforced disappearance and widespread and systematic torture and other ill-treatment, including through the denial of medical care; the failure to respect fair trial guarantees, including the systematic denial of access to a lawyer at the investigation stage to individuals facing national security charges; the use of forced “confessions” obtained under torture and other ill-treatment as evidence by courts to form the basis of convictions; and deaths in custody. We also express concern about ongoing cases of enforced disappearance through the systematic concealment of the fate and whereabouts of several thousand political dissidents forcibly disappeared and extrajudicially executed in secret in 1988 and the destruction of unmarked mass grave sites believed to contain their remains.

The Iranian authorities have consistently failed to take steps to address these human rights concerns, despite repeated calls including from UN treaty bodies, special procedures, the UN High Commissioner for Human Rights, the UN Secretary-General, the Human Rights Council, and the General Assembly.

Ignoring repeated calls for transparency, the authorities in Iran have also refused to submit to the scrutiny of independent monitors such as the UN Special Rapporteur on human rights in Iran. Instead, they have carried out reprisals against individuals for communicating with UN human rights bodies and intimidated and harassed victims’ families seeking truth and justice for their loved ones killed during the November 2019 protests, in the downing of a Ukrainian passenger plane by the Revolutionary Guards in January 2020, and during the 1988 prison massacres.

With Iran’s presidential election scheduled to take place in 2021, the undersigned organizations are seriously concerned that ongoing impunity for the crimes and human rights violations committed by the Iranian authorities will embolden them to continue the pattern of severe repression of the rights to freedom of expression, association, and peaceful assembly, as well as unlawful use of force against protesters, documented over the past year, especially if they are not held to account by the community of states.

For these reasons, the international community must raise the alarm and condemn these persistent and gross violations of human rights in Iran, including by voting in favor of draft resolution A/C.3/75/L.31/Rev.1. With this vote, your government will send a strong message to the Iranian authorities that the repetition of past patterns of grave violations will not be tolerated, that impunity must end, and that the international community is expecting without delay the adoption of long-overdue human rights reforms and tangible improvements to the human rights situation in the country.

The Advocates for Human Rights

All Human Rights for All in Iran

Center for Human Rights in Iran

Centre for Supporters of Human Rights

International Movement Against All Forms of Discrimination and Racism (IMADR)

World Coalition Against the Death Penalty