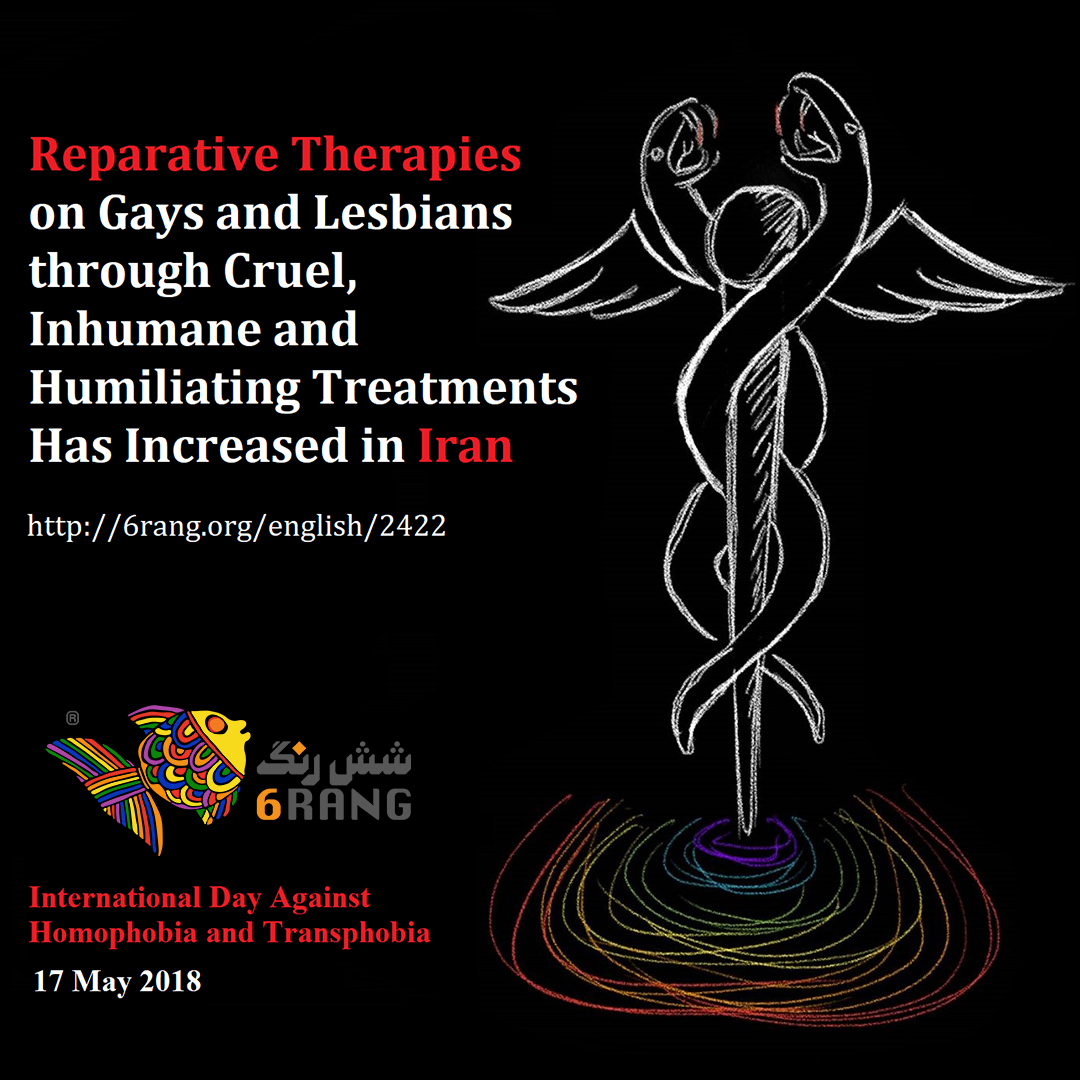 Reparative Therapies on Gays and Lesbians through Cruel, Inhumane and Humiliating Treatments Has Increased in Iran

6Rang, 17 May 2018 – The number of private and semi-governmental psychological and ‎psychiatric institutions and clinics treating homosexuals has seen a significant increase in the last year, despite the ‎Islamic Republic officials’ denial during a UN session in March 2017, of promoting psychological and psychiatric reparative ‎therapies to change individuals’ sexual orientations and gender identities.

‎6Rang’s field study on the polyclinics, institutions and private clinics, that have listed counselling ‎to LGBTI people as one of the areas of their expertise, show that these centres consider ‎homosexuality to be a disease or sexual deviation, and have made a business by alleging in ‎their advertisements that they can cure this disease. Some of them believe that homosexuality ‎is a form of addiction and treat homosexual clients with the same methods used to cure drug ‎addicted patients of addiction. This study includes a total number of 11 medical centres, counselling clinics ‎and private clinics, five of which are in Tehran, the rest in cities across Iran.‎

An institution called ‘The Anonymous Sex Addicts Association of Iran’ with branches in 18 ‎Iranian provinces, has listed curing homosexuality among its treatment programs. The institution’s website claims that participation in these sessions can result in transforming same-sex sexual feelings ‎into brotherly feelings towards the person of the same-sex.‎

Due to the lack of clear, accurate data on governmental budgets in this regard, 6Rang was ‎unable to verify whether the clinics and institutions active in reparative therapies on homosexuals ‎receive governmental funds.‎

Shadi Amin, coordinator of 6Rang, states that, “It’s been many years since the international ‎community has raised serious questions on the pathologizing view and the medical approach toward sexual ‎orientation and gender identity and [such reparative therapies] have since been banned in many countries. ‎However, the findings of our research show how a medical view to these issues inhibits ‎understanding and social acceptance in the absence of awareness-raising on sexual ‎orientation and gender identity, and endangers the lives of many young adults and teenagers.”‎

In addition to carefully reading the posts, brochures and videos published on websites of ‎these centres, to collect information, 6Rang’s ‎volunteers also went to these clinics disguised as clients and documented how they were treated after disclosing feelings of same-sex attraction. This research has additionally taken ‎input from two psychology experts of LGBTI issues in Iran. The results show that many of these ‎psychiatric and psychological centres in Iran use one of the following methods, or a ‎combination of them, to try to change the sexual orientation and gender identity of their gay or ‎lesbian clients.

The first group consists of centres and clinics that consider both same-sex attraction and an ‎inclination to change one’s sex to be symptoms of another psychiatric disorder, thereupon ‎attributing the person’s different sexual preferences to a certain psychiatric diagnosis, and then taking measures to treat that diagnosis. For instance, a same-sex attraction may be considered a ‎symptom of a mood disorder, and the patient is consequently prescribed mood stabilizers or antipsychotics. As ‎another example, same-sex attraction may be regarded as a mental obsession, and common ‎methods to treat obsessive disorders including pharmacotherapy (medicinal treatment) and ‎cognitive behavioural therapy are applied. This group of health-care professionals consider persons with a desire to ‎change or modify their sex (transsexuals), to be suffering from a delusion that makes them ‎believe they should live in an opposite-sexed body. They proceed to treat this “delusion” ‎symptomatically, through the use of antipsychotic medications or shock therapy.‎

The second group of medical centres claim to specialize in homosexual reparative therapy and regard same-sex attraction as a deficiency in behavioural and cognitive development, such as weak ‎interpersonal skills or low self-esteem. They presume that a person with same-sex attraction has not ‎yet been able to experience positive relationships with the opposite sex due to ‎environmental factors. In these centres, they direct the individuals to change their sexual ‎orientation by encouraging them to establish relationships with the opposite sex (behavioural ‎therapy) and attempting to treat the purportedly irrational belief of finding a person of the same-sex ‎attractive (cognitive therapy). This group seeks to control sexual behaviour and usually pressures the patient by holding them responsible for the treatment’s failure, blaming ‎failure on the patient’s lack of willpower and claiming the patient did not want to be ‎cured. Through this reasoning, the health-care professionals do not hold themselves accountable for their failed treatments and rid ‎themselves of any concern for the patient. Multiple cases have been reported to 6Rang which show that this group ‎of medical centres also use aversion therapies such as electric shock on hands and/or genitalia, ‎simultaneous drug-induced nausea and presentation of stimulators related to homosexuality, and re-conditioned masturbation, in which the individual is told to picture the opposite-sex while being forced to masturbate.

The third group of medical centres seeking to convert gays and lesbians, consider same-sex ‎attraction as an indicator of a subconscious conflict or past trauma, and attempt to identify ‎the root cause of the ‘problem’ by using methods like hypnosis, attempting to induce ‎opposite-sex attraction. They may also conduct a purported psychoanalysis into the individual’s history ‎of personal relations with significant men and women in their lives, such as their parents. These ‎health-care professionals often cause the client a loss of time and financial resources in long ‎sessions, only to confuse the LGBTI person with some general comments and simplistic ‎interpretations, later intensifying the individual’s sense of self as a diseased person. They ‎usually conceal their failures in reparative therapy on the sexual orientation by saying to gay clients,

‎“You need to reconstruct your relationship with your mother to be interested in women again,” ‌‎or to lesbian clients,

‎“You have a conflict in your relationship with your father which has caused your lack of interest ‎in men.”

Confronted with such suggestions, the clients who are severely dissatisfied with their sexual ‎orientation usually cease any same-sex sexual behaviour for some time, but the desire and the ‎orientation often persist. Sometimes the clients grow tired of the ongoing therapy, and to save themselves further inconveniences, express that they have been cured. The therapist interprets this this result as a success in treatment.‎

The last group of medical centres practicing reparative therapy takes advantage ‎of the client’s dissatisfaction at their own orientation and identity. Making use of the client’s religious tendencies and the ‎sense of guilt, these health-care professionals intimidate them by warning of homosexuality’s dangerous physical and ‎mental consequences, social stigma and familial rejection. The centres aim to direct clients ‎to choose heterosexuality as the only sensible option. In this method known as “spiritual therapy,” the focus is on ‎practicing prayer, piety and overcoming evil thoughts.‎

Shadi Amin, coordinator of 6Rang explains, “our interviews with the victims show that in ‎many cases, the psychoactive medication and other types of reparative therapies may cause ‎loss of interest, concentration and memory loss to the extent of dropping out of education, severe ‎depression, and increase suicidal tendencies. In other words, through therapies and social ‎pressures, individuals capable of love and a normal life are led down a destructive path.”‎

Last March, during the consideration session of the Islamic Republic of Iran, the head of the UN Committee on the Rights of Persons with Disabilities (CRPD) challenged Iran over LGBTI rights. “What health services could medical professionals in your country (Iran), provide for ‎lesbian and gay people who suffer from psychosocial disabilities caused by minority stress? We have ‎received information indicating that in such situations, lesbian and gay people have been subjected to ‎harmful conversion therapies such as electric shock, unnecessary medication, and hormone therapy ‎instead of receiving support aimed at self-awareness and self-acceptance. Do you acknowledge that ‎such conversion therapies take place in your country? We have seen a statement by the head of the ‎High Council for Human Rights who said that “homosexuality is a very bad illness and homosexuals are ‎sick people who must be treated… and be put under psychiatric care and sometime even biological ‎and physical care.” Can you comment on this taking into account that homosexuality is not considered ‎a disease under the International Classification of Diseases and conversion therapies have been ‎condemned by the Special Rapporteur on Torture?”‎ she asked.

The Iranian delegation responded to this question by stating that homosexuals are not subjected to electroshock or other coercive ‎therapies, and even enjoy support provided by Iran’s Welfare Organization. He did not specify what kind of support these people receive.

In 2013, the UN Special Rapporteur on Torture reiterated his concern over “homophobic ill-treatment on the part of health-care professionals,” which include a variety of practices, “fall within the definition of‏ ‏cruel, inhuman or ‎degrading treatment provided in Article 16 of the CAT (Convention Against Torture), because they ‎inflict pain and suffering,” upon the individuals, “for no therapeutic ‎and justifiable purpose.”‎ 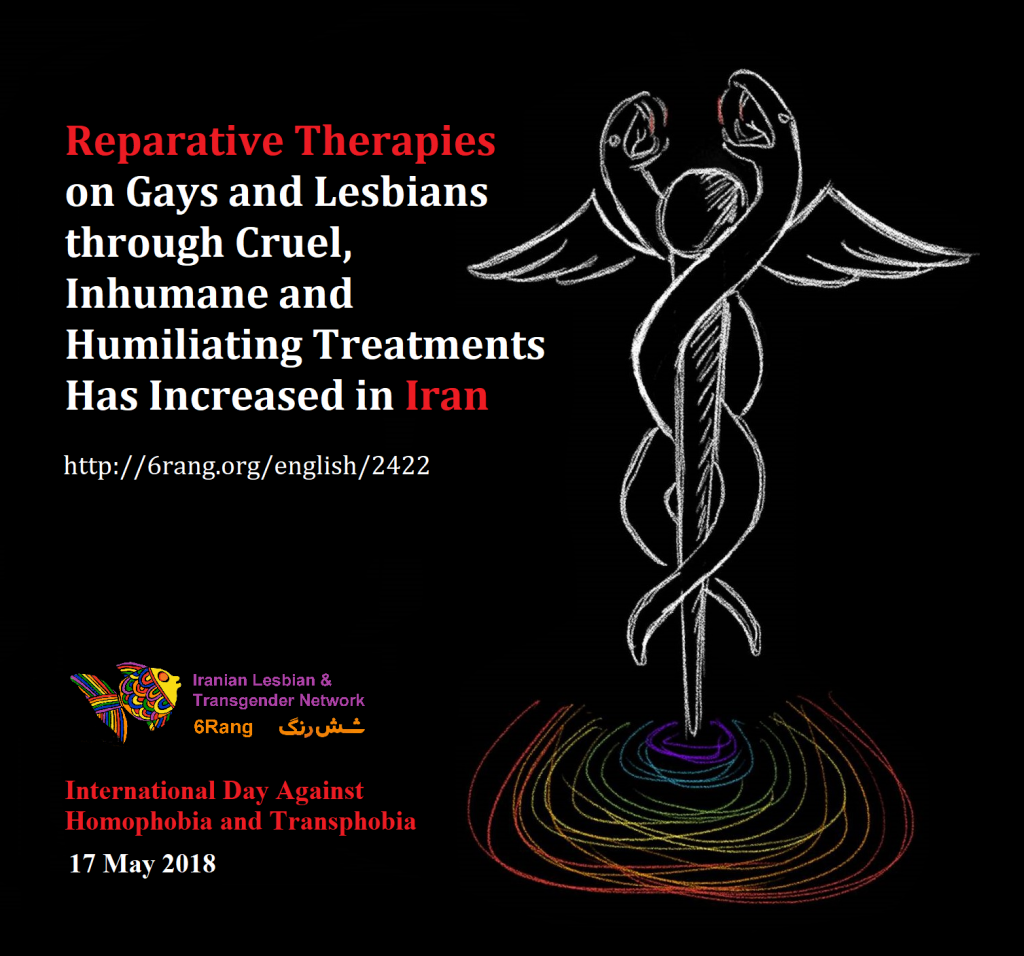 This report is published on ILGA Asia at: