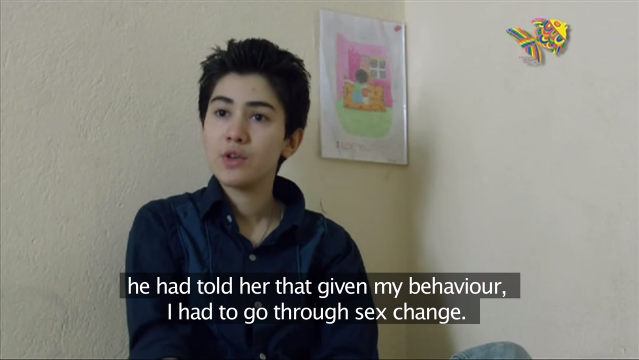 “The sex change operations carried out in Iran are nothing short of a crime,” says Akan, a transgender, assigned female at birth, who experienced discrimination and violence on a routine basis in his secondary school in Sanandaj.

He was told by a psychologist that he must undergo sex reassignment surgeries, when he visited to relieve the pressure and scrutiny he was suffering, due to him loving a girl.

Akan, who hates being called “a lady”, believes that the government of Iran is “swift” in carrying out the surgeries and issuing new documents to erase homosexuality; in other words, to ensure a heteronormative face for the society.

Pathologizing and criminalizing non-normative gender and sexual identities endanger the lives of all transgender and other LGBTIQ individuals alike. It is our lives that we want decriminalized and depathologized.

Watch his testimony below:

Although horrific, Akan’s Testimony is a typical example of the life of all LGBT Iranians. 6Rang (Iranian Lesbian and Transgender Network) releases a video of Akan’s story of rejection, social pressure, and eventual escape. The film shows the life of stigma faced by Iranians whose gender or sexual identity falls outside of a strict binary.

The film features Akan, living as an asylum seeker in Turkey, facing daily harassment from teachers, students, policemen, and family members for a gender identity that was seen as morally “wrong”. When Akan was in middle school, school authorities attempted to use sexual reassignment surgery as a “cure” for what were described as “pathological feelings”. Akan was not given an adequate description of the risks involved with such a procedure, or any acknowledgment that such feelings might have been “normal”. This approach to LGBT Iranians, as well as the descriptions of homophobic and transphobic harassment, appears to be typical in Iran, as detailed in 6Rang and Justice for Iran (JFI)’s joint research on LGBT Iranians, including the report Diagnosing Identities, Wounding Bodies. Based on a wide range of interviews conducted with LGBT Iranians living in Iran and in exile, 6Rang found repeated, systemic rights violations at the hands of a state that treats homosexuality as an illness and sexual reassignment surgery as its cure. Basic rights, such as rights to employment, education, and access to goods and services are denied unless one submits to living as a heterosexual member of a strictly-defined biological sex. The systemic nature of this harassment has created a large and growing population of LGBT Iranians in exile in Turkey and around the world. In the case of Akan, this meant severe parental pressure to live as a girl and to love boys, constant harassment from authorities to wear a headscarf, and an attempt to “solve” the problem of Akan’s identity with an arranged marriage. At school, teachers imposed isolation: “They said I would corrupt other students and that I should not have any contact with them.” The combined effects of anti-LGBT prejudice led to three suicide attempts. “We believe the only way to change the situation of many Iranian transgender individuals like Akan is attempting to abolish the laws which criminalise same sex relationships and do not tolerate any gender expression which does not comply with heteronormative norms.” said Shadi Amin, Co-coordinator of 6Rang. Akan’s video testimony is one part of 6Rang & JFI’s joint project, No to Forced Sex Change. http://6rang.org/english/2241
https://6rang.org/english/wp-content/uploads/2017/10/post30.jpg 1080 1080 milad https://6rang.org/english/wp-content/uploads/2020/11/logo-6rang-en.png milad2017-10-23 12:43:392020-11-16 06:36:17Toward Depathologizing Trans: Decriminalizing Gender and Sexual Identities
0 replies