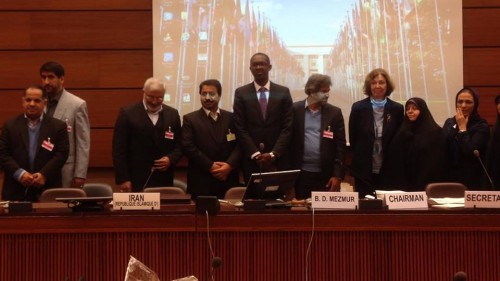 6Rang, 19 January 2016 – For the first time, the Committee on the Rights of the Child questioned the Iranian government about the human rights of LGBTI children. The committee completed two sessions of review on the situation of children in Iran in Geneva last week. The Iranian delegates evaded many questions during the two day sessions by delay, denial and even at times mischaracterization of Iranian law. Clarence Nelson, one of the committee experts, raised the issue of LGBTI children in Iran citing that children had to undergo coercive measures to “correct” and “cure” their “problem”. These practices include but are not limited to unnecessary hormone therapies, electroshocks and even life-threatening sexual reassignment surgeries. Since on the first line of questioning the Iranian delegates remained silent on this issue, he raised the question again asking the delegation to comment on reports of violence against gay, lesbian, bisexual, transgender and intersex children but no response was forthcoming.

“The statements by Iranian government in response to some of the issues raised, were misleading, innuendos, missing facts, scattered truths and even explicit lies” said Shadi Amin, who represented the 6Rang network, and was present in the session.

In the Islamic Republic of Iran’s written reply to the Committee, the Iranian government had not even distinguished between an intersex child and a bisexual child. Misidentification of intersex children with bisexuals in a written response by a nation-state is truly disconcerting. This action of Islamic Republic’s government shows a deep lack of scientific knowledge or perhaps adequate consideration and investigation on the part of the state. In their reply, the Islamic Republic had also explicitly mentioned that homosexuality is considered a form of illness and thus the state sanctioned treatment of “gender identity disorder” mandates sex reassignment surgeries. “The statements by Iranian government in response to some of the issues raised, were misleading, innuendos, missing facts, scattered truths and even explicit lies” said Shadi Amin, who represented the 6Rang network, and was present in the session. In two previous reports to the committee, 6Rang had explicitly addressed the situation of the LGBTI children in Iran. 6Rang’s report contained specific details about unnecessary hormone therapy, electroshocks and sexual reassignment surgeries.  The report had also denoted the lack of knowledge and lack of access to scientific information for the LGBTI children in Iran. “Although the committee members asked about LGBTI children on multiple occasions, the Iranian state decided to demonstrate their indifference by remaining silent on this issue.” Shadi Amin added. The committee also expressed serious concern regarding discrimination against adolescent girls, ethnic and religious minorities, street children, hijab, early and forced marriage and other forms of discrimination. Committee on the Rights of the Child is expected to release their Concluding Observations on the status of children’s rights in Iran and Iran’s obligations in implementing the Convention on the Rights of the Child.   More about this issue: The Situation of LGBT Children in Iran, 6Rang submission to the UN Committee on the Rights of the Child List of Issues by the Committee Islamic Republic of Iran Reply to the List of Issues Follow-up Submission to the UN Committee on the Rights of the Child