Men Arrested at a Party in Isfahan Charged with “Sodomy” 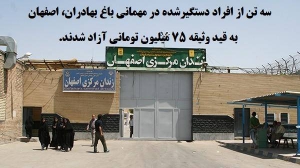 6Rang, 16 April 2017: An estimated 30 men arrested last Thursday in a friendly gathering in Bagh-e Bahadoran, Isfahan, have now been transferred to Dastgerd Prison. Sources have informed 6Rang that a court in Isfahan has charged them with “sodomy and consuming psychedelic drugs and alcohol.”

According to the reports 6Rang has received, on Thursday, April 13th, at approximately 8:30 pm, Basij militia forces raided a gathering of young men and transferred the arrested men to the Basij base in Bagh-e Bahadoran and then to Isfahan Police Station. The authorities involved have informed the families of the estimated 30 arrested men that, “their crime is homosexuality, and they will be detained for at least 3 days without visitation.”

6Rang has so far published the testimonies of people who were tried and sentenced after being arrested in similar gatherings. These testimonies describe various forms of degrading treatment, sexual insults and mental abuse, as well as physical torture during arrest and detention.

The right to privacy, which includes the freedom to gather in private settings, is one of the fundamental human rights. No judicial or law enforcement administration may invade the private places of citizens.
On Monday April 18, 2017, three of the detainees were released on a bail of 750 million Rials (about USD 20,000), but because of the threats and pressures they were subject to, they have not accepted yet to take part in interviews and talk of their experience.

6Rang hopes that the families will surely and vastly protest the detention of their children by contacting Iranian and International human rights organizations, including Amnesty International, to expose such human rights violations and demand the freedom of their relatives.

6Rang condemns any acts of degradation or oppression upon the detainees and demands their freedom.