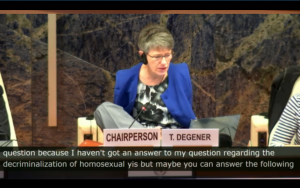 The UN Committee on the Rights of Persons with Disabilities (CRPD) raised several questions to Iran’s delegation on the rights of LGBTI individuals in its two-day review last week, including the questions about coercive treatments.

The Islamic Republic of Iran’s representative at the UN’s 17th Session of the CRPD, which took place in Geneva 22-23 March 2017, denied subjecting persons with different sexual orientation to any conversion treatments including electroshock therapy.

6Rang had previously submitted to the Committee an ‘alternative report’ manifesting the results of its field study on the situation of homosexual and transgender individuals in Iran. The submission focuses on two sets of abusive practices in particular: “reparative therapies” intended to “cure” homosexuality; and grossly substandard sex reassignment surgeries which are carried out without free and informed consent and afflict transgender persons with long-lasting physical or mental health conditions and illnesses, impairments and disability.

“According to studies done in different countries, criminalization, discrimination, and societal ignorance and prejudice about homosexuality places lesbian and gay people at risk of serious distress and poor mental health, including psychosocial disability. Does the Iranian government acknowledge this to be the case also in Iran?” asked Theresia Degener, the Committee Chairperson. “Do you intend to decriminalize homosexuality and specifically abolish articles 136, 147, and 233-240 of the Islamic Penal Code?”

The deputy of State Welfare Organization of Iran, Hossein Nahvinezhad, answered the two questions without mentioning homosexual and transgender people.

“With regard to the question about hermaphrodites [partially inaudible], ´two-gendered’ and ´trans´ persons, we absolutely do not categorize as mentally ill people whose gender is ambiguous due to hormonal or physiological condition. On the contrary, the Welfare Organization has a department which supports these people.  Once their gender is established and their physiological preferences have been considered, support and aid is given even with the [sex reassignment] operation and post-operation social and economic issues,” said Nahvinezhad.

The Iranian delegation also gave an indirect answer to the question regarding the decriminalization of homosexuality. They admitted that in accordance with the Islamic laws, the Iranian authorities are unable to fully comply with the Convention.

On the second day of considering the report on Iran, the CRPD continued to question the delegation about the rights of homosexual and transgender individuals.

“If a person with disabilities who is solely dependent on his/her family, and later discloses about his/her sexual orientation, such as being gay, lesbian, transsexual or whatever, will he/she lose support from the family and the social supports provided by organizations belonging to government and the private sector? If so, how do these people live without support? Is there any measure to help solve the problem?” asked Monthian Buntan.

Following to these questions, Theresia Degener reminded the Iranian delegation that a clear answer to the questions was not received by the CRPD on the first day. “I haven´t got an answer to my question regarding the decriminalizing homosexuality. And maybe you can answer the following question under Article 5. What health services could medical professionals in your country, (Iran) provide for lesbian and gay people who suffer from psychosocial disabilities caused by minority stress? We have received information indicating that in such situations, lesbian and gay people have been subjected to harmful conversion therapies such as electric shock, unnecessary medication, and hormone therapy instead of receiving support aimed at self-awareness and self-acceptance. Do you acknowledge that such conversion therapies take place in your country? We have seen a statement by the head of the High Council for Human Rights who said that “homosexuality is a very bad illness and homosexuals are sick people who must be treated… and be put under psychiatric care and sometime even biological and physical care.” Can you comment on this taking into account that homosexuality is not considered a disease under the International Classification of Diseases and conversion therapies have been condemned by the Special Rapporteur on Torture?” she asked.

“Regarding the question Madam Chairperson asked, whether people with other sexual preferences are subjected to electroshock therapy, other coercive therapies or forced operations, the answer is not at all! We strongly deny it. No such forced treatments and no pathologization that might lead to such treatments are practiced. Moreover, these people may enjoy the supports provided by Welfare Organization as do other citizens,” replied a member of the Iranian delegation, without specifying the type of support.

“Iran’s insubstantial responses and denial of policies demonstrate that their internal policies are not defensible in international events. We will use their replies to oppose the current discriminatory status and insist on compliance of their internal policies with international standards,” said Shadi Amin, the Coordinator of Iranian Lesbian and Transgender Network (6Rang) who had also participated in a NGO briefing meeting with the Committee members prior to the session.

“The Iranian delegation’s irate and puzzling reaction to the questions regarding the rights of LGTI persons and the fact that they finally had to state their position prove the importance of our presence in such events,” Amin added.

The CRPD also noted that they have not received any independent report on the implementation of the Convention on the Rights of Persons with Disabilities from NGOs inside the country.

“There is currently no independent body taking the role of monitoring the implementation of the Convention,” said a Committee member. “We are saddened and disappointed that there is little to no information from the civil society organizations, particularly organizations of persons with disabilities within Iran, which makes it difficult to compare and confirm the validity of the information,” he added.

The Islamic Republic of Iran ratified the Convention on the Rights of the Persons with Disabilities in 2008. The 17th session was the first time that the CRPD reviewed the implementation of the Convention by Iran. During the review, the CRPD also asked the Iranian delegation a series of questions about numerous types of violence and discrimination against women with disabilities, the unemployment of 60% of persons with disabilities in Iran, the marriages between cousins that are permitted in Iran, and whether the Islamic Republic had considered any ground rule to prevent this type of marriage which is likely to cause the disability of the couples’ children.

To read 6Rang’s alternative report to the CRPD, click here.

The Committee report is available here.