6Rang, 20 May 2016: In Iran, the exemption of young gay individuals from compulsory military service comes at the cost of revealing the most intimate details of their sexual life at the disposal of law enforcement; while same-sex relations is illegal and punishable by up to one hundred lashes or even the death penalty.

According to reports received by the 6Rang Network, the Iranian State under the pretence of implementing new regulations pertaining to medical exemption from military service, has engaged in an unprecedented information gathering operation by the police and the General Military Service Organisation. In these searches some of the most private details of sexual relationship and life choices of the applicants are collected by the state. This amount of data gathering has obvious privacy concerns, full implications of which are not yet clear.

The new law also allows gay individuals to be identified by the police, judicial authorities, employers and those responsible for educational centres who can simply look at their military exemption cards, which functions as one of the few forms of acceptable IDs in Iran.

According to Iranian law, all male citizens are required to report for military service at age 18 and must serve a consecutive 24 months period. Homosexuals and transsexuals are not required to serve in the military. Prior to the ratification of the new regulation, both categories were exempt from military draft under a section of the law which classified homosexuality and transsexuality as a mental disorder. However, after the ratification of the new regulations, although homosexuality and transsexuality are still categorized as mental disorders, a specific section of the law provided two new provision with regard to these groups which are specified on their ID cards and would in essence identify them as homosexuals and transsexuals. Not only the new protocol is more time consuming, but it is also degrading and violates the basic human rights of the individual applicants. The process forces the individual applicants to declare having same sex relations and reveals intimate details of their sexual lives. 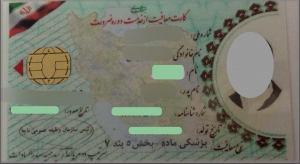 Sample of an ID card for a gay person which mentions ‘section 5, paragraph 7’. this section and paragraph number automatically identifies the cardholder as a gay person.

Asad, one of the applicants who was able to obtain their permanent military exemption status after two years told 6Rang: “After a while you would have been told in no uncertain terms that if you don’t confess to your sexual relations; they’d probably draft you. It is not enough to be only a homosexual; you need to report that you have had same sexual relationships which is an illegal act.”

6Rang has interviewed six individuals who recently obtained their IDs through medical exemption in Iran. These interviews indicate that the timeline for processing each application has been prolonged and the amount of data collected about every individual has gradually increased.

Many applicants at different stages of the police inquiry receive a form in which they have to declare their sexual desires, gender preferences and even the name and number of people whom they had been sexually involved with.

Another applicant who shared their experience with 6Rang said “after obtaining one’s status they would write on your form that you are diagnosed with an intangible disorder (i.e. homosexuality). And then I was told to report to a Hospital for further psychological examination after I received a letter in the mail.”

Our research shows that in every step of the process one may be asked to report to the respective office and their application may or may not be denied. Yunos, who was asked to report back told 6Rang: “The General Military Service Inspector’s Office is in charge of re-examination of applicants. In that office they asked me ‘whether or not I would like to have a girlfriend,’ and ‘whether I have been in active position in sexual act instead of being passive.’ They also asked me ‘don’t you like to be satisfied by the opposite sex?’ They asked how many [sexual] partners I have, how much I get paid [for a sexual act],’ ‘why didn’t I pray so I’d be cured.’ They said ‘don’t you feel guilty?’ They also asked me about the people whom I know in Telegram and Line chat applications and they wanted me to show them my phone apps, but I told them I was not a member anywhere and I don’t know anyone in those apps.”

According to Iranian laws, if someone is a member in a Telegram or other interrelated social media groups related to homosexulaity, and if they confess to being a member of such groups, they could be prosecuted for engaging in publication of such material or other related crimes.

This applicant also told 6Rang: “They also asked me what type of a career I am interested in. And when I told them I wanted to work in the medical field, they told me that if I had such capabilities, I would have at least cured myself.”

Payam is another applicant who needed military exemption to leave the country. He says: “They sent me to the General Military Service Inspector’s Office. They told me to go upstairs to the administration’s office. The inspector asked me personal questions such as ‘are you passive or active in sexual intercourse?’ and then after asking a lot of other questions, he gave me a six month temporary exemption.”

All the individuals who seek the so-called medical exemptions on homosexuality grounds are required to take the Minnesota Multiphasic Personality Inventory test which is a questionnaire form with 567 questions. If someone takes this test with their real name and identity, a significant amount of information with regard to their identity, personality, beliefs, character and even socio-political ideology would be revealed to the police. Furthermore, they are asked to seek treatments from a psychologist or psychiatrist – who is trusted by the police and military system – during their 6 months exemption.

Mansour, who had to undergo this process says: “The psychologist asked me multiple times when I first felt that I had become like this [i.e. a homosexual]? As if he wanted to catch me off-guard. Every time I had to explain to him that I have always been like this [a homosexual]. Then he asked me to bring my boyfriend with me to the sessions and he wanted to see my personal photos; but I couldn’t show him my personal photos [because they are personal]. In the fourth session he asked me how one can truly determine if someone is gay or not. He asked me whether coming into contact with these people would help someone to know them, and asked what percentage of them are truly gay in my opinion and what percentage are bisexual.”

The new regulation which was passed in 2014 and has been gradually implemented in the past two years, has two new features.

Secondly, all the officials involved in the process of issuing military service exemption IDs have an intimate knowledge of the applicants’ life and sexual desires. Also, whenever gay individuals are required to provide their ID in an overwhelmingly homophobic society, they would be at the risk of being chastised and their human rights being violated (because of their sexual identity).

Iranian medical exemption laws for military service are indications of legal discrimination against homosexual and transsexual people in Iran. While over three decades ago the World Health Organization declassified homosexuality as a mental disorder and in 2014 the American Psychological Association declassified being transgender as a mental disorder, Iran still criminalizes same sex relations.

All of the above evidence indicates that Iranian gay persons have no choice but to submit to the current laws in order to obtain military service exemption based on their sexuality, which is being considered a mental disorder. Obtaining this ID for many homosexuals is a necessity since the military environment is violent, homophobic and filled with degrading behaviour and even very real threats of rape. Those who wish to legally travel out of the country also need to either obtain their exemption card for the so-called medical reasons or pay 150 million Rial on bail. As a result of the new regulations, a vast number of gay individuals are forced to cooperate with the police and ‘voluntarily’ submit their intimate information to the authorities.

6Rang (Iranian Lesbians And Transgenders Network) expresses its deep concern that this information could potentially be used in future to intimidate, prosecute, persecute or cause the death of many such individuals.