Torture in the name of treatment: Breaking the silence on medical abuse against transgender, lesbian and gay people in Iran 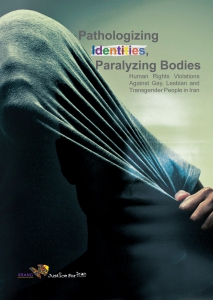 6Rang, June 24 2014 | Iran must stop imposing sterilization, sex reassignment surgeries and reparative therapies on lesbian, gay and transgender people as a precondition to become “legal” and enjoy their human rights, 6Rang and Justice For Iran(JFI) say in a pioneering report which highlights the shocking results of Iran’s current policies on homosexuality and transsexuality.

On 26 of June in a historic occasion a coalition of Iranian LGBT rights activists, human rights campaigners and refugees will join Istanbul LGBT pride to launch a new ground breaking report that details how lesbian, gay and transgender individuals in Iran are being diagnosed with gender identity disorder and told to undergo medical treatments, including sterilization, to “cure” themselves of homosexual feelings and cross-gender expressions.

The report Pathologizing Identities, Paralyzing Bodies: Human Rights Violations against Lesbian, Gay and Transgender People in Iran analyses these abusive practices through a human rights framework by placing them in the wider context of violence and discrimination that shapes the lives of sexual and gender minorities in Iran.

Iran is one of the five countries in the world that imposes the death penalty for certain same-sex sexual conducts. The country also criminalizes cross-dressing, imposes mandatory veiling, and enforces gender segregation in a vast array of public spaces. At the same time, following a 1985 fatwa by Ayatollah Khomeini, the country allows those classified as “transsexual” to change their legal status on the condition that they undergo sex reassignment surgeries. Taken together, this framework nudges lesbian, gay and transgender people to make an unenviable decision: either they profess themselves as “transsexual” and apply to undergo a raft of invasive and potentially harmful medical procedures or they continue to experience widespread discrimination and violence because of their real or perceived sexual orientation and gender identity.

“This report sought to define the ‘paradox’ of having freedom of sex change on the one hand and capital punishment for same-sex sexual relations on the other. The fact of the matter is that the politics behind Iran’s seemingly progressive stance on transsexuality is deeply homophobic and informed by stereotypical norms of masculinity and femininity. Our findings show that the Iranian authorities, including state-affiliated medical professionals, promote sex reassignment surgery as a means to resolve homosexual feelings and eliminate gender-variant expressions,” said Shadi Amin, 6Rang Co-coordinator.

“There are obviously transgender people who would like to access some of the treatments available for sex reassignment, but many others do not. Iran must ensure that lesbian, gay and transgender people can express their sexual orientation and gender identity, while protecting them from violence and discrimination and without imposing on them compulsory requirements that violate their human rights,” said Shadi Amin. 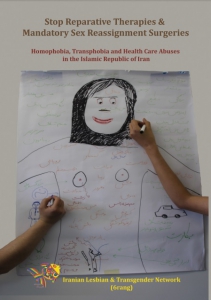 The number of sex reassignment surgeries performed in Iran are reported to be higher than many other countries in the world. The new report raises concerns that many of these surgeries may be rushed and violative of the standards of free and informed consent.

Iran’s censorship laws prevent access to accurate information on matters relating to sexual orientation and gender identity. Many surgeons fail to discuss the efficacy and potential for harm of surgeries when counseling individuals seeking surgical treatments, despite reports of such surgeries frequently resulting in serious scarring and long-lasting health complications due to negligence or lack of training on the part of surgeons in Iran.

A female-to-male transgender interviewed for the report said: “I had no one to support me throughout this process. So my doctor felt free to experiment on my body by subjecting it to operations she had never tried on anyone else before … she damaged my muscular tissues and the cartilaginous part of my sternum … my chest muscles have been removed and my ribs are damaged.”

These incidents of medical malpractice are not known to have been investigated, leading to a situation of pervasive impunity.

As a signatory to the International Covenant on Civil and Political Rights, and the International Covenant on Economic, Social and Cultural Rights, Iran must respect and protect the rights of lesbian, gay and transgender people to life and to the highest attainable standard of health, and protect them from torture and ill-treatment, including reparative therapies, involuntary sterilization and sex reassignment surgeries administered without free and informed consent.

Pathologizing Identities, Paralyzing Bodies: Human Rights Violations against Lesbian, Gay and Transgender People in Iran is the outcome of a two year research project, including several field trips to Turkey and 13 other countries, and in-depth interviews with more than 80 individuals from Iran’s lesbian, gay, bisexual and transgender (LGBT) community.

The report is launched in Istanbul, Turkey, where large numbers of Iranian LGBT asylum seekers are based, many of whom agreed to be interviewed by 6Rang and JFI and participate in their community research workshops.

To read the full reports, please click the pictures.

For further information and to arrange interviews in English, German and Persian please email: info@6rang.org or info@justiceforiran.org

« Gay, Iranian And Stylish in Exile
Join the Call To End Medical Torture against Transgender, Lesbian and Gay Iranians at the Istanbul Pride »