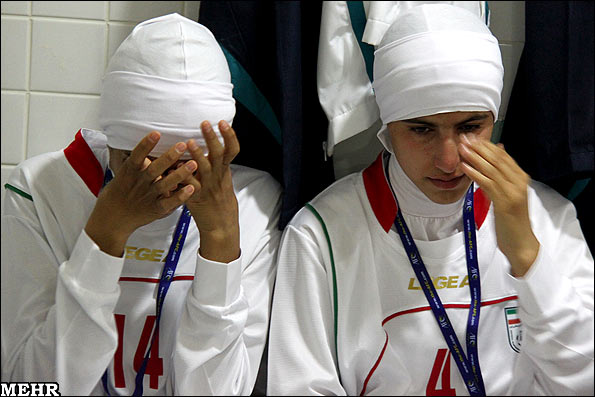 Iranian Transgender and Lesbians Network (6Rang), 16February 2014 – Last week Iran Football Federation officials announced the expulsion of seven women football players under the guise of ‘sexual ambiguity’. Following this announcement some media and Internet outlets failed to investigate this case of serious human rights violation. Instead, they have treated the issue of women football players and sexual identity with mockery and insult.
Reports received at 6Rang point to the fact that the players experience many instances of discrimination simply because their behaviour or appearance may differ than what is deemed socially acceptable as the usual definition of femininity.During an interview with ISNA on 7 February 2014 Ahmad Hashemian, the chief surgeon in charge of the medical team of the Football Federation stated the exclusion of the seven players from the games was the sex determination policy.
In fact, the latest interview by Ahmad Hashemian stating the need for football and futsal players to undergo specific medical examinations confirm findings by 6Rang and indicates that the decision to expel all seven players preceded the relevant medical examinations.
According to 6Rang’s trusted sources in Iran, during the last few years, a number of female athletes have randomly faced disciplinary actions because of short hair, tattoos, piercing or apparently manly behaviour or clothing. In many instances these peculiarities are based on reports by herasat (a security force) of the federation, coach or those team members who oppose the players with non-traditional approach to gender roles.
A female athlete informed 6Rang intelligence forces of the Federation pay undue attention to those women who behave against traditional norms, and if players are suspected of homosexuality or transexuality, the forces immediately remove them from the team. Furthermore, women on national teams are not allowed to wrap their chests or have their hair cut short.
According to female athletes and reliable sources whose identity cannot be disclosed for security concerns, reference to medical examination for “gender determination” is often used as grounds for exclusion of female athletes. These examinations involve a psychological test that include questions such as degree to which one feels the need to attend women’s gatherings, interest in sharing one’s life, marriage, sexual desires, justification for short hair cuts, etc. if test results indicate the need, then women are required to undergo physiological tests involving breast and vagina by a medical team composed of three female and three male doctors. In some cases female athletes are subjected to ultrasound of their uterus and ovaries. Receipt of a medical certificate pertaining to “female identity” is the final stage of this series of examinations, and the main requirement for certification and participation in games.
It should be noted the above-mentioned examinations contradict international standards and violate the athletes’ inherent dignity.
Based on reports, over the past three years women have been required to undergo psychological tests and sex examinations as a prerequisite for membership in national women’s teams. However, those women who have short haircuts, wear men’s clothing, have a deep voice or do not apply make up face higher number of tests.
In an interview with Etemad, Zohreh Haratian, an officer at the anti-narcotic committee of FIFA explained these tests are aimed at determining players are of equal physical strength and said: “It is based on this that FIFA has set its gender identification policy. Likewise, AFC in Asia requires all its subsidiary federations to follow the same. The main point of this policy is that it should be determined whether every football player who takes part in the games is male or female. Since 2011 the Football Federation in Iran has followed the same policy to define all its procedures”
However, since 2011 the Olympics Committee only recognizes androgen tests. Based on this test if an athlete’s level of androgen matches that of a man to the extent that she may be at an advantage in comparison to her competitors, then she is denied admission into the games. Although according to the same rules, once the level of androgen reaches its normally accepted level for a woman the athlete will be re-admitted.  None of the international regulations allow for a psychological test, nor permit accommodate tests on women who may have a different sexual identity. In no instance is sex reassignment surgery a prerequisite for admission into games.
In an interview with ILNA, an official news agency Ahmad Hashemian identified “resolving one’s problems through sex change operation and passing medical examinations” as a requirement for “participation in football and futsal” for women who have been banned from the games.
A female football player told 6Rang she knows at least two athletes who after the tests for membership in the national team were diagnosed with “gender identity disorder” or transexuality and forced to undergo sex change operation, and have now quit futsal.
Since 2013 transexuality has been removed from the list of sexual disorders and is no longer considered an illness. It is now recognized as a sexual disorder and cannot be accounted as a justification for limitation or elimination of a player. Changing the sex of woman to a man drastically reduces the chances of a professional athlete from competing with men and results in their elimination from professional games, particularly at the national level.
Despite repeated confirmations by Federation officials that illegal drugs are not a factor in banning these players, many of the reports published in various domestic and international sites confuse issues and often site illegality of drugs as an internationally recognized standard as the justification for this decision. However, as Ahmad Hashemian has clearly stated: “this ban is not because of illegal drugs.”
For further information, please see the link below:
Blatant Discrimination in Football: Gross Gender-based  Measures against Female Players in Iran