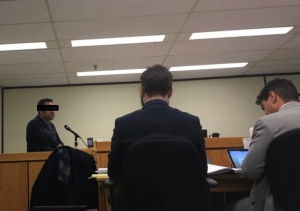 26.April.2018
For three years, Iranian writer and human rights activist Shadi Amin was publicly subjected to
a stream of extremely serious derogatory accusations posted on an anonymous website and on
Facebook, and sent under false names to third parties such as Amnesty International and the
BBC. Ms. Amin had left Iran, where she had been persecuted for her human rights work, and
was living in Germany and continuing her international human rights work. The attacks, which
were vicious and wholly untrue, damaged her human rights work in Europe and elsewhere in
the world. The postings falsely accused her of having a “criminal record”, of engaging in
“abuses, rape, bullying and money laundering”, of being guilty of “documented cases of verbal,
physical and sexual violations”, of being guilty of “corruption”, of being a “homophobe” and
“anti-male”, and of engaging in an abusive relationship with a vulnerable refugee that
constituted “emotional rape”.
Although the postings were anonymous, Ms. Amin, with the technical help of IT savvy friends,
believed she had traced the website, www.justice4lgbt.com, to another Iranian ex-pat living in
Toronto and active in the Iranian community, Arsham Parsi. Parsi strenuously denied any
involvement in the world-wide campaign of online abuse, but when the vicious harassment
continued, Ms. Amin launched a defamation action in a Toronto court.
On April 23, 2018, after a trial lasting seven days, Toronto Deputy Judge Christopher Ashby
ruled in a 26 page decision that he had “no hesitation” in finding that the web postings,
Facebook posts and emails were legally defamatory, and that despite his vociferous denials,
Arsham Parsi “was involved in the creation and publication of the articles on justice4lbgt.com
and for the email”. The court ruled that Parsi was liable for the defamatory website and related
web postings and emails, and ordered Parsi to pay Ms. Amin $25,000.00 in damages, in
addition to interest and court costs.
The full judgment can be found here: https://goo.gl/Um1Vxu
Deputy Judge Ashby stated that he ruled against Parsi in part because of the “disingenuous way
he testified.” Regarding damages, the judge stated:
[155] In my opinion, the general damages for libel amount to the maximum claimed of
$25,000… The plaintiff, although a resident of Germany, is well known throughout the
international LGBT community. The defamatory statements accuse her of rape, money
laundering and other serious charges. The defamatory statements were broadcast on the
Internet and there has been a complete absence of any retraction or apology. The defendant
appears to have been motivated by his anger at the plaintiff. For these reasons I believe the
maximum amount is appropriate.

As part of the trial, Ms. Amin retained a leading IT expert, who testified in court that buried
deep in a hidden corner of the anonymous offensive website’s code was an obscure “pingback
address” which matched the corresponding coding in another website controlled and operated
by Mr. Parsi, and that the overwhelmingly most likely explanation was that the two websites
originated from the same administrator. After years of denying that the offensive website had
any connection to him, Mr. Parsi finally had to admit the connection, but now suggested that
his webhosting account that originally hosted the defamatory website might have been
“hacked”. The judge did not buy Mr. Parsi’s explanation because of overwhelming evidence to
the contrary, including Mr. Parsi’s total failure to provide any evidence that in any way showed
that his webhosting account had been hacked, and his total failure to investigate this supposed
“hack”.
“The last few years have been excruciating for me,” Ms. Amin said. “When someone is
constantly and anonymously posting the most vicious lies about you, that your long-time and
dearest friends in many countries, never mind your professional colleagues, can read, and you
don’t know who’s reading them, and you have no way to defend yourself, it’s incredible.
Finally we have a court judgment recognizing how wrong and harmful that website was, and
holding the individual responsible to account, despite all the cover-up. I brought this lawsuit
not just for me but for the LGBT community both inside and outside Iran as a way of fighting
back against defamation, lies and character assassination, and hopefully to prevent something
similar from happening to others”.
“This is one of those cases where it feels really, really heartening to see justice done” said Ms.
Amin’s lawyer Cory Wanless of the Toronto law firm Klippensteins Barristers & Solicitors.
“Ms. Amin was finally able to shine a spotlight on the source of all this extreme nastiness, and
have a court confirm that she was innocent, and have some accountability for someone willing
to hide behind a bunch of mysterious IP addresses to essentially assassinate someone else’s
character. Crucially, this ruling will help Ms. Amin once again focus on what is most
important: her work in defending the rights of women, the rights of members of the LBGTQ
community, and human rights generally.”
For more information, please contact:
Shadi Amin
Frankfurt, Germany
Phone: +49-1774912493
shadi@6rang.org
or
Cory Wanless, Klippensteins, Barristers & Solicitors
Toronto, Canada
Phone: (416) 598-0288
cory.wanless@klippensteins.ca