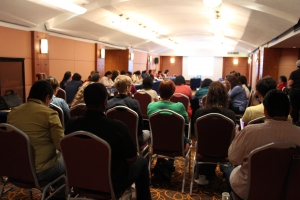 The second day of the international conference, ILGA, program has started in 4 halls with the following subjects: Gay, Lesbian, Trans and bisexuals. In these groups everybody could participate with any identity and there were no limitations regarding self-identification. The session of lesbian group was the most populous, the second most crowded was gays group then transgender and finally the bisexual group meeting had the lowest attendance. At these meetings, representatives from 35 countries including Cuba, Sudan, Taiwan, Philippines, Sri Lanka, Kenya, Southern Africa, Egypt, Spain, England, Netherland, Thailand, Indonesia, Mexico, Moldova, Puerto Rico, Tunis and Malta presented and discussed about the ways of empowering lesbians. 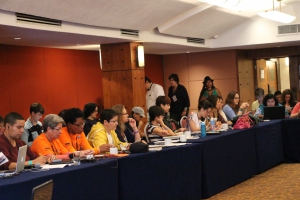 In the lesbian meetings got the chance to criticize putting condoms in the gift packages, which were given at registration time. I shared my thoughts ironically on how possibly they could be used and pointed out that there is a special attention towards male sex, which itself comes from public belief, I added, on the other hand it would put men on the upper hand in such gatherings and societies. Other participants welcomed this point with applauses and laughs.

At the same meeting, I also mentioned the absence of Iran in Asian and other reports, and added: since Iran is one of 5 countries in which the penalty for homosexual relationship is execution, ILGA must show special attention toward it and four other countries.

In the afternoon of the second day, the participants separated into groups based on the continents they came from.  Participants in the African session discussed about the situation in these countries and its effect on their safety. They talked about lack of understanding from European ILGA officials. For instance the money issues they had to deal with, getting visa was another problem because they had to take the risk of showing ILGA’s invitation to Mexican Embassy. On Egyptian woman said I was worried the whole time because of that and it needs to be considered by ILGA coordinators.

In the gay meeting people had participated from different countries. A member of Zapatistas from Jyapas spoke about the freedom of homosexuality authorized by Marcus commander, but despite of the presence of supportive laws there are many violence against homosexual people and the government is not doing enough to show its support for them.

A few people told their coming out stories and its difficulties. African Gays have been facing the same struggle as Iranian lesbian and other homosexuals; their governments in order to suppress homosexual rights movement claims homosexuality is a non-African phenomena.

At transgender meeting, Tamara one of the transgender activists started the session by speaking about the health issue and right of work for transgender people. The discussion continued about how this issue has to be addressed and pursued. 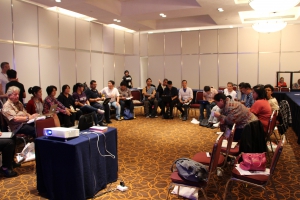 After the lunch break participants with all sexual identifications divided into groups based on their continents or nationality. For example in the Asian group there were people from Sri Lanka, Indonesia and etc. In the African group there were Gay and Lesbian activists from Nigeria, Uganda, Kenya and etc. In the Europe group we could see some European activists including ILGA and international organizations officials. Members in America and Oceania group were in minority. 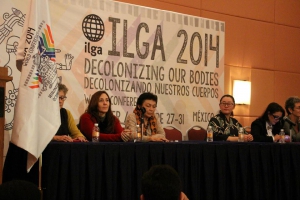 At the end of the second day of the conference the initial part of the programs in conference came to an end and from tomorrow the main conference is going to start, which in addition to discussions, the members will make decisions.

At the night, the opening ceremony of the conference took place; also in this ceremony a representative from Mexico Ministry of interior gave a long speech about supporting LGBT societies and talked about governmental promises, which lead to protest of the Mexican activists. The protest went back to the disappearance of 43 protestor students in the last month. They were saying that the government had role in this crime or at least the government is not putting enough efforts to pursuit the issue. Mr. Ricardo Spinola left the hotel after the speech through the back door in the kitchen.