ILGA and Iranian lesbians and transgenders

The 27th international conference of ILGA, international united of lesbian, gay, bisexual, transgender and intersex, is taking place this year in Mexico on October 27-31th, with the main theme “Decolonizing our Bodies”. 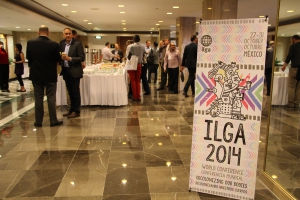 ILGA is an international federation established in 1987. It is linked to 1100 organizations from 110 countries, which are active in the field of sexual minorities’ rights. This civil organization cooperates with The United Nation and governments.  Since the establishment until now, ILGA has held conferences in three continents, in which between 300 and 450 representatives of civil society organizations from around the world come together for a week. Inclusion of public officials, legislators, academics, directors of cooperative institutions and representatives of offices of United Nations in these conferences contributes to more productive discussions and better analysis of the global situation.

In the first day morning, at the time of registration, beside of the conference programs, booklets and brochures and cards, gift packages have been given to participant including eight condoms. Once again the attention of world to the issue of male sex caught my attention. I decided to wait for the right time to ask one of coordinators, why they have to put time and energy to provide facilities for their participants sexual activity?

The environment is friendly. I meet with some officials of ILGA and other international organizations including Turkish and Arab activists who I know from the past. All members are interested in each other’s activity and ideas in the field. 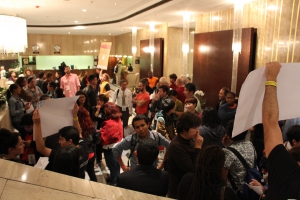 Four conferences are taking place at the same time in four separate halls. The halls are named Mexico 1 to Mexico 4 and in each hall different subject is being discussed.

In Mexico 1, the interfaith dialogue regarding homosexuals and other sexual minorities is being discussed. A Muslim Imam, named Ludovic Mohammad, a priest and a rabbi are the guests of the panel. Over two past years they have been creating a network called interfaith and have been holding meetings, which you can watch on YouTube. The participants of this panel which included representatives of Islam, Jew, and Christianity were arguing that; we as believers in these religions can break the resistance of dogmatic and fanatic religious groups and empower religious homosexuals in order to improve religious communities. 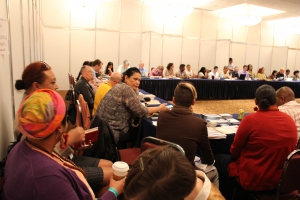 But in the progress of the discussion, they came up with some logics which in my view needs to be criticized, for instance they announce Islam as a peaceful and defendant of human’s rights and they claimed that there is nothing against homosexuality in Islam. I uttered my criticism and said; It seemes to me that in this gathering people instead of accepting religion as a private aspect of a person try to force the religion into the discourse of homosexual’s right, which is limiting. In fact, I believe that the efforts to change the viewpoints of religious people should not lead to invite LGBT society and individuals to religion, especially in such gatherings which are hard to participate. These opportunities better not be wasted on religious advertisements. They should rather use the time to discuss current issues, solution and strategies.

This idea was accepted by others and was emphasized by one of Egyptian and Southern African activists with same critique explaining by other examples.

In the second meeting after the tea break, the religious leaders turned the meeting into praying ceremony and this showed me that my feeling and understanding of them at the first point wasn’t wrong, so we need to take the critique and their motivations and movements seriously. 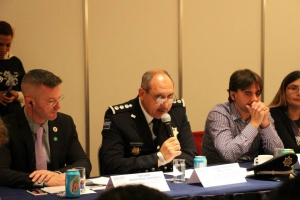 At Mexico 2 hall, the public safety for homosexuals and trans people was the subject of the discussion. One of speakers was a police officer from the commission for security of Mexico Police Federal and the other speaker was one Colombian activist who is responsible for gender mainstreaming in Colombian Historical Memorial Centre.

At Mexico 3 hall, the subject of discussion was Education and speakers from Cuba, Canada, Mexico, Bolivia, Netherland and Spain were present.

Then we had lunch break and after that we had meetings about immigration, right of work, Trans and intersex rights, right of work for LGBTs including another meeting on interfaith networking. 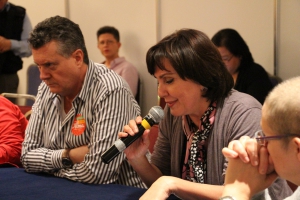 At the meeting about rights of work, The Labor minister Mrs. Patricia Mercado appeared and answered to the questions of participants about discriminatory laws regarding trans people. She told that many of male to female trans genders who have been working as sex workers now have the benefit of social workers at their service in the streets also their work has been registered as an official occupation. At this time one present transgender activist declared that the fact that transgender people only by their body can have a place in the labor market shows there’s discrimination against them and it has to end. Also some representatives from Cuba, Brazil, Mexico, etc. spoke about education. All of the meetings were hold in English and Spain.

There were some other meetings about the international mechanisms including CEDAW, UPR, Special Reporters, etc. which provided an opportunity for participants to exchange their experiences in these fields. I came up with the productive experiences of 6rang about writing, and presenting the reports for Political, Economic, Social and Cultural commission meeting of The United Nation and presenting the reports to the special reporter. This meeting could be useful for people who did not have experience in reporting. Also there were some other meetings about violence within the families and other subjects.

At Mexico Hall 4, some activist from Southern Africa, Cuba, Ecuador and Brazil participate and discuss the Health issues of homosexuals. The mean age is 35 and upper. Most of participants have good experiences in these fields.