TRANS WOMAN PREVENTED FROM ENTERING THE TURKISH PARLIAMENT: “IF YOU HAVE A BLUE ID, YOU ARE A MAN”

A trans woman was discriminated against September 19, 2014 prior to a press conference to be held by the CHP (Republican People’s Party) MP Aykan Erdemir at the Turkish Grand National Assembly. The woman who wished to attend the meeting concerning LGBT (lesbian, gay, bisexual, trans) rights was asked to go through security checkpoint designated for men on the grounds that she carried a blue identity card. 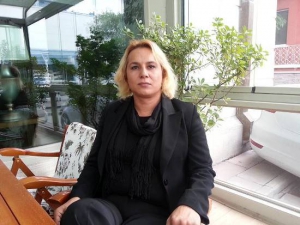 “I have been going to the Grand National Assembly to attend these civil rights meetings since 2000. This morning we went through the pre-search without a problem; at the second search, there was a security detector marked as “woman” and I naturally chose that one. There was a commotion as they were searching my bag. I sensed that the security officer felt the need to confer with their friends about a matter. Since I had entered through here before, I assumed that the issue had something to do with the materials we brought, but that was not the case.”

If you have a blue identity card, you are a man!

Kılıçkaya, who said she’s had previously no problem entering the Grand National Assembly grounds, got held up at the security check because of the incongruence between her gender identity and the color of her official identity card.

“They told me to pass through the section for men and that men would conduct the search. Both I and my friends who were accompanying me were hurt by this. Up until this day, in protests and even during my time in prison, I have always refused to have myself searched by a man. I deem it harassment, in fact a rape when done without my consent. I am an activist involved in identity struggles in this country. The purpose of the meeting we attended today was about the need for Turkey to abide by the U.N. and European Union agreements that it has signed.”

“The officers did not know how to handle the situation”

“They sent me to a cabin. When they removed me from the women’s cabin and told me, “excuse us, you need to enter from the other side,” I refused and saw that the officers did not know what to do. They said, “if your ID card is blue, you need to enter from the other side.” We had a back and forth exchange for about 20 minutes about how the procedure is such and such and how if we have a male id card we had to use the man’s cabin, etc.”

Kılıçkaya was able to enter the premises where the meeting was held only after she had to pass through an area designated for men and with a more precise security detector without [a pat-down] search.

“I thought that the meeting was more important so I passed through where I was told to. The officers weren’t able to make sense of it either because when the officer who took my identity card said to me, “Here you go, Ms. Buse,” I reminded them, “you are violating the procedure. If you must follow procedure, then since my ID is blue, you should address me as Mr. Buse.”

“I asked them how come there was not a single trans officer when the Ministry of Justice was working on separate prisons for trans people. I said, “isn’t this proof that trans people in this country are being pushed to prostitution?” Everyone fell silent. We also chose to be silent and proceeded to the room where the meeting was held. What was upsetting for me was the difficult position the officers were placed in, where they did not know how to handle the situation.”

“And what was most striking was the fact that I, a citizen with a blue or pink ID card cannot enter the Grand National Assembly to demand my rights. It is troubling that I have to show extra effort.”

“What would happen if 15-20 trans people wanted to visit the Grand National Assembly?”

The discrimination she has faced in entering the grounds of the Assembly on the basis of her gender identity has led Kılıçkaya to a whole set of questions:

“Before I entered I had seen the sign that said “The Assembly is open to people on certain days.” O.K., so if 15-20 trans people wanted to visit, not even for their rights, but just to see the Assembly, will they have a similar treatment? Will the security officers demand to do the search with a man and a woman? Will the officer who persuaded me to pass through the section for men and addressed me as Ms. Buse while registering me experience the same inconsistency? If I need to pee while in the Assembly, would I have to use the men’s bathroom?”

“My dream is an Assembly open to everyone”

Kılıçkaya has not lost hope about the Assembly being a space where anyone can enter without worry:

“I think that this victimization must be brought to an end, and people must be able to comfortably enter the Assembly to search for their rights or just to visit. As a human rights advocate who visited and met with Cemil Çiçek once regarding hate crimes, I hope that he will show proper sensitivity about this matter. I hope the Grand National Assembly will be an open Assembly, open to all people.”