Join the Call To End Medical Torture against Transgender, Lesbian and Gay Iranians at the Istanbul Pride 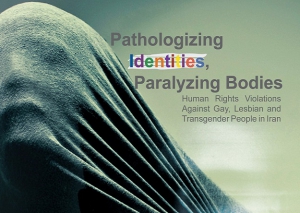 On Thursday 26 June 2014 Shadi Amin of 6Rang and Raha Bahraini of Justice for Iran will join a panel to launch the first ever report, Pathologizing Identities, Paralyzing Bodies, on how Islamic Republic laws set the grounds for misinformation and forced sex reassignment procedures of transgender, gay and lesbian Iranians in order to erase this segment of the population. Each year thousands of Iranians flee to neighboring Turkey to save their lives, including many transgender, gay and lesbian citizens. The panel is part of the weeklong 2014 Istanbul Pride. It will take place at 2 pm at the Cezayir Meeting Hall. Follow us live on Ustream, Facebook and Twitter.

« Torture in the name of treatment: Breaking the silence on medical abuse against transgender, lesbian and gay people in Iran
6Rang at Istanbul Pride 2014: We are everywhere; homosexuals and transgenders must be accepted »